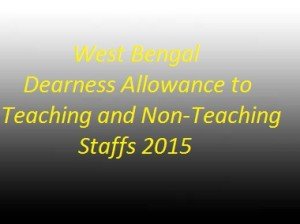 Sub: Grant of Dearness Allowance to the Teaching and Non-teaching employees of Non- Govemment Aided/Sponsored Educational Institutions with effect from 1st January, 2015.

The undersigned is directed by order of the Governor to say that the Governor is pleased to direct that all whole time approved teaching and non-teaching employees of recognized Non-Government Aided/sponsored Educational Institutions, both Primary and Secondary, who are in receipt of Dearness Allowance at State Government rates i.e. 58% of Band Pay and Grade Pay taken together, with effect from January 1, 2014, shall draw Dearness Allowance @65% with effect from the 1st January, 2015, in terms of Finance (Audit) Department’s Memo No. 145-F(P2) dated the 9th January, 2015.

2.  The Dearness Allowance sanctioned hereinabove shall be rounded off to the nearest rupees, in each case.

3.  The Governor has further been pleased to direct that this additional installment of Dearness Allowance payable in terms of this order shall be paid along with the Salary, through Banks, to all employees of Non-Government Aided/Sponsored Educational Institutions both Primary and Secondary and other organizations, irrespective of their basic pay, with effect from 1st January, 2015.

5.  All concerned are being informed accordingly.

Disbursement of Salary - Wages - Pension to the … END_OF_DOCUMENT_TOKEN_TO_BE_REPLACED

Protection of pay to the Central Government … END_OF_DOCUMENT_TOKEN_TO_BE_REPLACED

Restricted the payment of Night Duty allowance to … END_OF_DOCUMENT_TOKEN_TO_BE_REPLACED